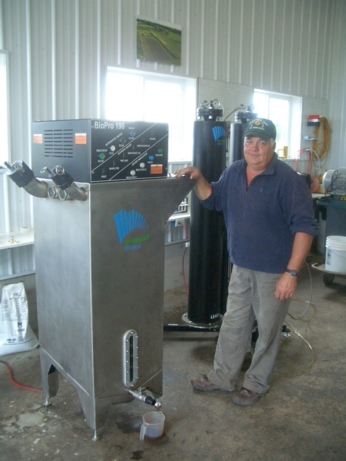 Roger Rainville’s dairy-turned-energy farm in Grand Isle County is a place where area dairy farmers, organic growers, and landowners have made biodiesel from their own locally-grown sunflower seeds.

In 2008, when diesel prices rose from $4 to $5 per gallon, Rainville began experimenting with farm-scale biodiesel production. With guidance from University of Vermont (UVM) Extension and grant funding from Vermont Sustainable Jobs Fund’s Vermont Bioenergy Initiative, Rainville began planting sunflowers on a portion of his 214 acres and installing biodiesel processing equipment. Oilseed sunflowers (as opposed to confectionary sunflowers that are grown for eating) are the most popular oilseed crop in Vermont, with hundreds of acres planted statewide. The crop is grown in rotation with grains and grasses and yields high quantities of oil.

Following harvest with a combine, a seed cleaner and grain dryer are used to prepare the seeds for storage in a 200-ton grain bin prior to processing. A flex auger system moves the seeds from the storage bin into hoppers on each press, and screw augers push the seed through a narrow dye at the front of the press. Extracted oil oozes from the side of the barrel and is collected in settling tanks while pelletized meal is pushed through the dye at the front and is stored in one-ton agricultural sacks. The oil can then be used as culinary oil for cooking or further refined into biodiesel. The leftover seed meal is used for livestock feed, fuel for pellet stoves, or fertilizer for crops.

The small-scale biodiesel production facility at Borderview Farm is an 800 square foot insulated and heated building (the space does not need to be heated, but the oil should be stored where it will not freeze) that houses an oil press, a BioPro 190 automated biodiesel processor, a methanol recovery system, and a set of dry-wash columns for cleaning the fuel. The clean oil at the top of each settling tank is added to the BioPro 190 processoralong with lye, methanol, and sulfuric acid. The automated processor runs through several stages of processing in about 48 hours (esterification, transesterification, settling, washing, and drying), with one break after 24 hours to remove the glycerin byproduct. Safety equipment in the processing facility includes personal protective equipment like aprons, gloves, eye protection, a ventilation system, gas detectors, and spill containment materials. At Borderview Farm a set of standard operating procedures hangs on the wall and blank check-sheets are in a binder to make the process easy to repeat. The finished biodiesel is stored in 250 gallon pallet tanks making distribution to different farms easier. The installed capacity of the facility can process 100 tons of seeds from 138 acres of sunflowers per year, yielding 10,500 gallons of biodiesel and 64 tons of sunflower meal (assuming the state average yield of 1,500 pounds sunflower seeds per acre and operation of 24 hours per day for 260 days per year).

Rainville switched from purchasing diesel for five tractors and one truck to making his own biodiesel. He wanted to be independent of imported fuel, and liked creating a new way for farmers to diversify. “Using land for making biodiesel is not the most economical option compared to some other crops, but it’s about creating opportunities to try something different,” says Rainville. 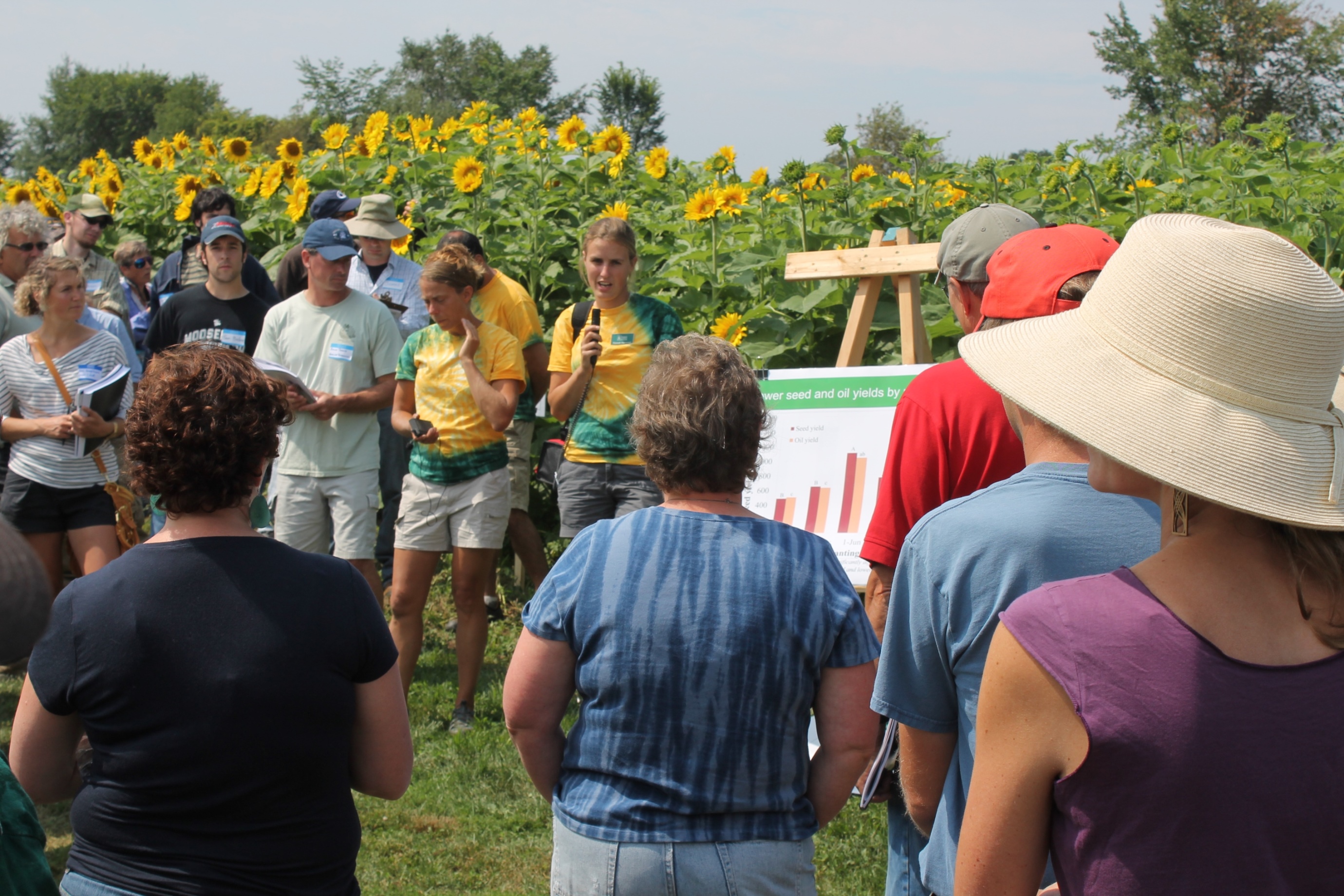 In 2012 a group of ten farmers working in cooperation with Rainville and UVM Extension—called the Farm Fresh Fuel project—grew 90 acres of sunflowers for development of biodiesel. Cooperating farmers were required to plant, fertilize, weed, and harvest the sunflower crop. Farmers worked to share equipment to accomplish this task. The seed was brought to Rainville for conversion into biodiesel. Rainville did the harvesting for all farms, bringing about 56,721 pounds of seed to Borderview Farm.

Seeds from the ten growers yielded about 3,000 gallons of biodiesel and about 20 tons of meal for livestock feed. The biodiesel and meal were then redistributed to the growers based on the relative volume of sunflower seeds they contributed. One participating dairy farm, Sunset Lake Farms, is using the biodiesel to heat office space, the milking parlor, and water for cleaning and sanitizing equipment, and fed the meal to milking cows at a rate of 3 pounds per day, saving about $3,000 on fuel and feed costs.

Rainville’s annual biodiesel use has ranged from 500 to 3,000 gallons per year. At current prices (over $4 per gallon for diesel and $2.29 per produced gallon of biodiesel) biodiesel has saved him from $500 to $4,000 per year in fuel costs. He also emphasizes energy independence as an added benefit. Plus, any growers that also raise livestock can use the meal, which is leftover after the oil is extracted, as part of their feed rations. Rainville recommends talking with an animal nutritionist to blend this into feed at the right ratio, since sunflower meal has a high fat content.