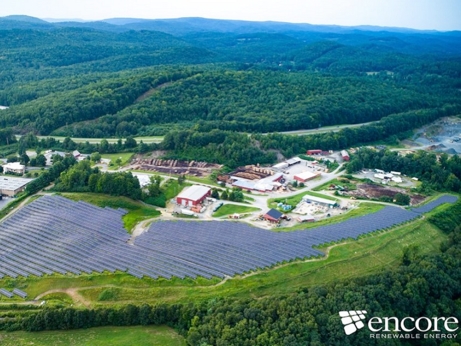 On October 11, 2018, the solar array at the landfill in Brattleboro, Vermont, was formally commissioned. Officials from a number of interested organizations were on hand, along with those of the Windham Solid Waste Management District, which manages the landfill. The solar array had been generating power since June 30.

The Brattleboro landfill solar project has been under development for five years, and has suffered a series of setbacks along the way. The developers were persistent, however, and eventually brought the long work to fruition.

Cable trays protect the integrity of the capped landfill where burying conduit and conductors was not an option.

Solar arrays on landfills have a common special requirement, which is that the integrity of the landfill cap has to be preserved. The cap is put in place when the landfill is decommissioned to trap methane gas from escaping into the atmosphere. This gas is often used to drive engines to generate electricity, if there is enough of it, or it is flared to prevent it from being released into the atmosphere.

The towns of Brattleboro, Wilmington, Readsboro, Vernon, Wardsboro, Dummerston, Halifax, and Newfane are all system stakeholders. Schools in Brattleboro, Vernon, Putney, and Marlboro are also beneficiaries, as are Landmark College and the Brattleboro Retreat. The savings for these municipalities and organizations are expected to start at $375,000 per year, increasing slightly over the 25-year term of the array’s operation. The Windham Solid Waste District is also to receive payments for a lease.

A company in Burlington, Vermont, Encore Renewable Energy, partnered with Sky Solar to develop and fund the project. Sky Solar, a world-wide company with headquarters in Hong Kong, did important parts of the engineering. We were told that Gran Solar, another worldwide company, supplied a number of solar installers through an affiliated company in North Carolina.

Much of the work on the array required local talent that was familiar with local conditions, electric codes, worker safety regulations, and the special requirements of landfill solar systems. Integrated Solar, of Brattleboro, Vermont, Southern Vermont Solar, of Westminster, Vermont, and Renewable Edge, in Tarrytown, New York, were responsible for electrical wiring, but much of the management of local organizations and personnel was done by Integrated Solar. This work went beyond simple management, however, to include keeping an eye on safety, quality control, and code issues. For example, the final push to finish the array was done in severely hot conditions, and it became important for the safety of workers that they be kept hydrated sufficiently. Integrated Solar’s Katrina Wilson said, “When that happened, we handed out a lot of water and Popsicles.”

The ground work, protecting the landfill cap, digging for subsoil conduits, and preparing and installing a concrete transformer pad, was all done by local contractors. Dynamic Organics, of Putney, Vermont, worked with Southern Vermont Solar to provide guidance on issues relating to ballasts and the landfill cap. The actual digging was done by Evans Construction, of East Dummerston, Vermont.

Andy Cay, the owner of Integrated Solar, as he was managing shares of the electrical wiring, was responsible for bringing into the job a number of other organizations, including friendly competitor Southern Vermont Solar, and Dompier Electric, of Brattleboro.

Victoria Roberts, from Southern Vermont Solar commented on the extent of local involvement, saying, “The strong collaboration of the local companies working together with the larger companies from out of state and country was key to overcoming the challenges to build the project. The globalized system of bidding came with added hurdles to an already complicated project. Pulling this off is an extraordinary accomplishment, but if Vermont is serious about being ninety percent renewable by 2050, we will need to be bold and participate in more of these complex collaborations.”