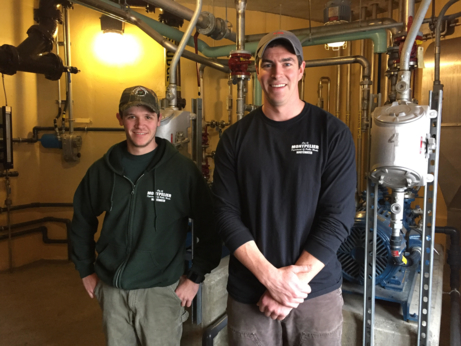 Montpelier’s Wastewater Resource Recovery Facility (formerly Waste Water Treatment Plant) treats approximately 1.8 million gallons of sewage daily and is the highest consumer of electricity of all municipal services. But through the dedicated efforts of city employees at the facility, the amount of energy it takes to treat each gallon of wastewater has decreased by nearly 75% between 2007 and 2015. The combination of improvements to mechanical motors and processing systems, in combination with a doubling of the volume of waste processed, has saved the City money on energy expenditures and also reduced greenhouse gas emissions by installing a methane flare. In addition, the facility uses methane captured from processing to heat the primary digester year round and one building in the winter months, saving over 25,000 gallons of oil a year. The photovoltaic panels on the roof also produced over 52,000 kWh of electricity in 2014.

The City of Montpelier received a 2015 Governor’s Award for Environmental Excellence in recognition of the Wastewater Resource Recovery Facility’s (WWRF) implementation of energy conservation measures that save approximately $58,000 a year in utility electricity costs, which translates to about 475 megawatt hours of electricity a year. The WRRF also received the 2015 Wastewater Utility Award from the NEWEA Utility Management Committee for operations and performance excellence and energy conservation.

With a current staff of only four employees, the 3.97 MGD facility, led by Chief Operator Christopher Cox, collaborated with Efficiency Vermont to review plant systems and then implemented various efficiency and operational improvements. In 2015, the team pursued additional opportunities to increase efficiency and reduce methane emissions, including:

For more information on Montpelier's efforts to transform its energy system visit: https://netzeromontpelier.org/2016/01/19/clean-water-less-electricity/