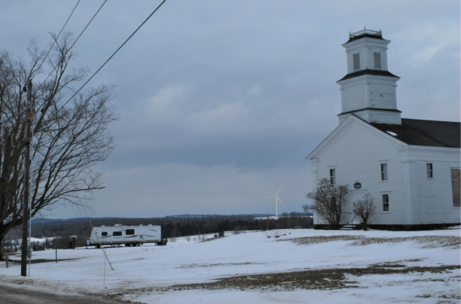 Holland, Vermont, a rural community on the Canadian border, is the home of the 450-acre Dairy Air Farm. The farm is run by native Vermonters Brian and Kim Champney. They live on the land they farm, tending a 250-head dairy herd. They, like many other farmers, actively keep alive a vital part of the state’s historic culture.

The heavy workload and economic pressures on farmers are legendary. Renewable energy, however, offers a certain improved security to nearly anyone who owns and operates a farm, as an alternative, relatively steady source of income. Importantly, to a farmer, the income is dependable regardless of such weather patterns as droughts or storms that could be destructive to nearly all crops.

The Champneys want to put up a single 2.2-megawatt wind turbine in a corn field on their land, surrounded by the fields and pastures of their farm. The land is flat, and the turbine is not on a ridge line.

Dairy Air Wind, with its single turbine, happens to be the only wind project being developed in Vermont at present. That gives it special significance to people who have no tolerance for wind-related energy. They seem to sense that they can stop any momentum for wind energy in the state, and it may be years before that momentum can be restarted.

Dairy Air Wind is being developed by AllEarth Renewables, whose communications manager Nick Charyk told us, “If we can’t support a single turbine on a family farm, on flat land, when the farmer wants it, we are saying no to everything. There is no more ground to give.” He continued, “The stakes are incredibly high.”

The stakes are much higher than some people realize. The energy provided under the status quo is making people sick, killing people, and destroying the environment. Figures from the American Lung Association suggest that Vermonters’ medical bills from air pollution caused by fossil fuels is about $1,000 per person per year. The most conservative estimate for deaths we have seen, which came from MIT last year, indicates that nearly 400 people in Vermont die prematurely each year because of air pollution. Numbers from such organizations as the World Wildlife Fund indicate that destruction among wildlife has reduced their populations to perhaps a quarter of what they were only forty or fifty years ago.

Clearly, we need to stop destroying ourselves, each other, and the environment. To do that, we need to stop using fossil fuels. To do that, we will need to go beyond merely getting all the electricity we currently use from renewable resources. We will have to heat our homes, schools, and businesses, operate our vehicles, and drive our economy without burning fossil fuels.

For a safe and comfortable future, we will have to use renewably-sourced electricity for heat, transportation, and industry. This may mean increasing our electric supply by a factor of two or three.

The U.S. Department of Energy tells us that we can get about 55% of our current electric needs met by small-scale distributed power, implying that it could meet perhaps 18% to 30% of future needs. Even adding that to the electricity we already have, we will have to increase our supply greatly. Two likely supply sources are utility-scale solar projects and wind turbines, both of which are being opposed. If these are rejected, we will probably need to import all additional electricity, which will mean building new transmission lines across hundreds of miles of farm fields and ridge lines.

One important point to remember is that despite what many people assume, Vermont is not at all on track to achieve its climate goal of getting 90% of its energy from renewable sources by 2050. Our goals have been effectively slowed to a crawl. We made a good deal of progress in the past, but it will take a long time and a lot of hard work to restore our momentum.

Another thing to remember is that the work that has been stopped would have made living more comfortable, healthier, and less expensive for all of us.