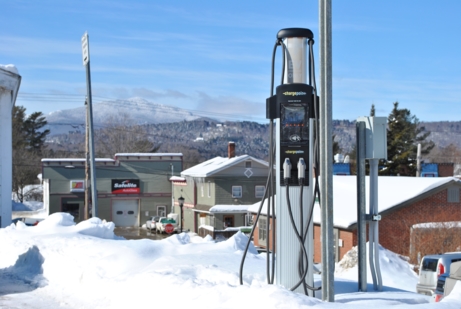 At the last Viva Las Artes! fundraising event at River Arts, Morristown’s community development coordinator, Tricia Follert, was approached by the event auctioneers, who wanted to know where the closest electric vehicle charging station was located.  Follert was proudly able to point to the public charging station located in the municipal lot at the corner of Hutchins and Pleasant streets, just outside the building they were standing in.

The charging station was installed in 2014 with grant funding supported by the Vermont Department of Environmental Conservation and matched by a 25 percent in-kind donation from the Town of Morristown and Morristown Alliance for Culture and Commerce, locally known as MACC.

The entire project was completed for $13,464. The location provided a convenient place for users to charge up or top off their car’s fuel while spending a little time in the downtown wandering the shops, restaurants or maybe catching a show at the Bijou or River Arts.

That is by design, of course. Follert points out that, in addition to providing an available fuel source for locals, visitors are drawn to town because the station is included on a state website listing all the charging stations in Vermont.

The Level 2 station offers a full vehicle charge in four to five hours or the ability for a quick top-off to up to two cars at a time. It runs at no cost to the town and brings in a small revenue.

Beyond these benefits, the station supports renewable energy efforts and decreases reliance on fossil fuels. In nearly two years of use, the station has had 560 charge-ups, generated $1,271.80 in revenue, saved 781 gallons of gasoline, and saved 2,614 kilograms of greenhouse gas emissions.

The U.S. Department of Energy cites that driving electric vehicles has several positive benefits, including increased energy security by relying on domestic electric grids as opposed to importing petroleum from countries subject to changes in supply and price. Though the purchase price of electric vehicles can be cost-prohibitive for some, it can be somewhat offset by federal and state tax credits as well as the eventual savings in fuel economy.

As the demand for these efficient cars increases, the cost to purchase will likely decrease. And that demand is expected to go up. In 2016, there were 13,000 charging stations and 32,000 charging outlets nationwide.

Brad Prior, a Union Bank employee and electric car driver, echoes that sentiment. “We’ve been enjoying a pretty serious pumping from all the oil-producing countries and prices are low on gas, but it’s not going to stay that way,” he cautions. “And when you see [gas] prices going up, the price of the electric vehicle is going to go down.”

Prior’s commute is 80 miles daily round-trip. When he began thinking about making the switch to an electric car, he first confirmed with Follert that there were plans to install a local charging station. His car has a solid 75-mile range and is capable of more in mild weather.

“It’s still a pretty big savings if you’re doing any level of commuting,” he said, noting that with his electric car he is not burning the 1,000 gallons of gas he would have with his previous car, which got only 22 mpg. He is also pleased with the 2,500 kilograms he has been able to save in greenhouse emissions.