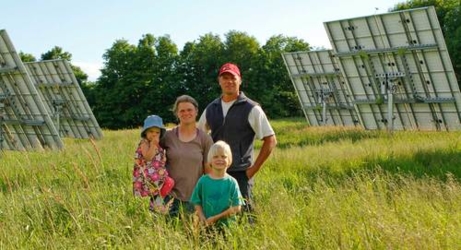 Fossil Fuels and our Food

Are we what we eat? Estimates show that using conventional agricultural practices can take ten calories of fossil fuel to produce one calorie of food!

Some estimates say it’s even higher.

For Christa Alexander, local, organic, and sustainable farming are ways to show her community that alternatives are possible. "When we decided on our growth trajectory, I knew I didn't want to rely on fossil fuels," she says.  Her farm not only excludes pesticides, but has also invested in developing fossil-free infrastructure and efficient technology—using solar power for electricity, and a biomass furnace and passive solar energy to heat her greenhouses.

"I feel it's part of my responsibility as a citizen of the world to be part of the solution, rather than continuing with the problems of fossil fuels."

Alexander’s farm, which she runs with her husband Mark Fasching, is called Jericho Settler’s Farm. In their former lives, Mark worked at Vermont Land Trust, and Christa at the Department of Fish and Wildlife. They began farming on Christa’s parents’ homestead in 2002, and started farming full-time in 2007. Their farm now encompasses 200 acres of land in Richmond and Jericho, where they have a flock of chickens, a flock of sheep, and grow organic veggies.

In search of alternatives to fossil fuels, the couple looked to solar. However, they were discouraged that the cost to purchase and install the panels was out of their price range. Fortunately, a friend of Alexander’s, working at Green Lantern Capital, offered a possible solution.

“He said ‘maybe we can help with that’,” Alexander recalls. Green Lantern proposed leasing land from Alexander in order to build the solar array on the Jericho homestead.  This enables the couple to get their electricity at a discounted rate.  Six solar trackers now provide all the farm's electrical power, supplying about 50,000 kilowatt hours each year.  In turn, Green Lantern recieves “solar adder” from Green Mountain Power, and receives the federal tax credits for contributing green power to Vermont’s electrical grid. The Alexanders plan to purchase the panels from Green Lantern in a couple of years at a significantly discounted price, so that their power will be virtually free! 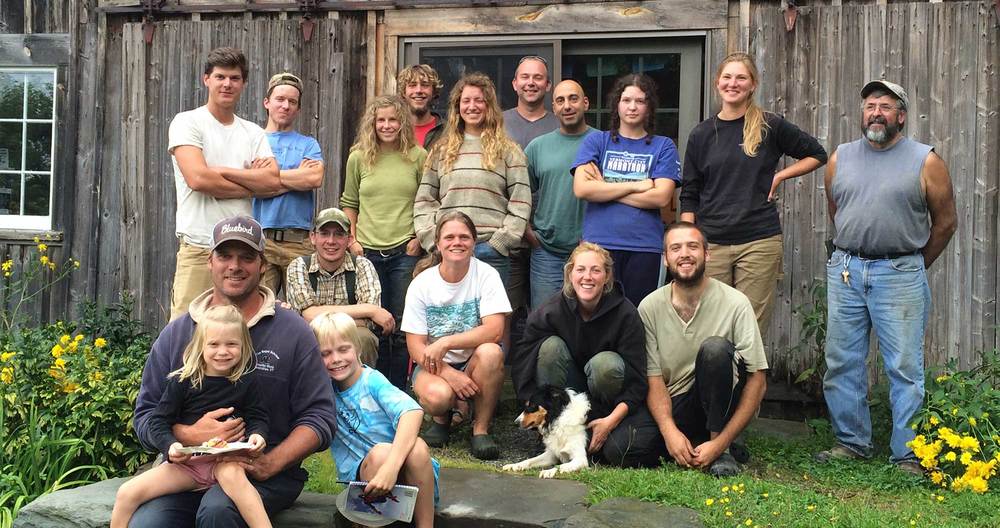 Not limited to solar, the couple also invested in a biomass furnace, which supports their ability to grow greens year-round. The furnace generates radiant heat by burning wood pellets, heating water that runs through a system of tubes beneath the hoop houses on the farm. The hoop houses also utilize passive solar, absorbing sunlight during the day while the plastic traps heat at night. This system allows the farm to plant early in spring, and make sure that the plants don’t freeze during the coldest nights. The system of passive solar is actually so efficient that the furnace is used mainly only during spring, when they begin planting early season tomatoes and squash.

“We definitely talk to other farmers… we share a lot of ideas, and we talk to UVM Extension and the Agriculture engineers. There’s a lot of cool things going on around here,” says Alexander.

As the farm grows, Alexander and Fasching have continued to invest in eco-friendly infrastructure for their business. In their newly-built barn, they installed a free-heat compressor system, which allows them to recover compressor heat. This can then be used for produce that needs to be stored at warmer temperatures. They have also installed high efficiency evaporative fans, which only turn on when needed, and door-strips, which insulate cooled rooms even when the doors are open. Efficiency Vermont also provided incentives for the farm to switch to efficient LED lighting and for engine-block timers, which reduce the amount of time that engines are idle, warming up before they need to be used on cold mornings.

At the end of the day, working with the sun and the earth is a labor of love for Alexander. “The farming community is incredible here: a giving, generous network of growers. It’s part of what I think is special about Vermont.”