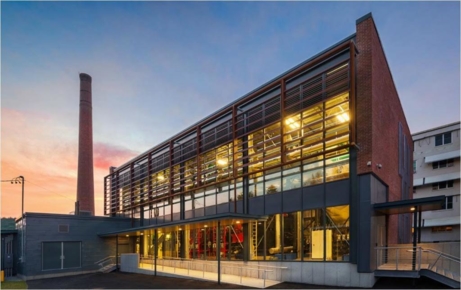 Benefits of the Project:

More than 20 downtown Montpelier buildings — including city hall, the police and fire stations, the elementary school, two churches and several private buildings — were heated last winter for the first time by a new state heating plant. District Heat Montpelier is a municipal utility that purchases biomass energy produced by the plant and distributes it via a network of underground pipes carrying hot water to customers connected to the system. The plant, located behind the Department of Motor Vehicles, burns wood chips to produce steam and hot water. The wood chips are sourced regionally in New England, including from Vermont. The new system went online in October 2014 and is credited with reducing emissions from fuel combustion by as much as 11 tons a year.

The project was developed in partnership with state government and provides heat to the Montpelier State Building Complex and to the core district of the Montpelier community. Exploration of a combined heat and power plant and a district heating system began in the early 1990s with several technical reports evaluating the technical feasibility of district heat in the Montpelier. Funding for the project feasibility studies came through $25,000 and $75,000 grants from the Clean Energy Development Fund, as well as through a bond re-vote by the city of Montpelier for $250,000. Funding for the implementation of the project came from a variety of sources including state and local governments, including $8 million dollars from the US Department of Energy, as part of the American Recovery and Reinvestment Act.

The district heat system is more efficient and has fewer emissions than many small, dispersed sources of heat.  In Montpelier’s case, this reduces health-threatening emissions by replacing many older boilers with a single, new, well-controlled, highly efficient central boiler. The project also supports local jobs in the forest products industry.

Vermont Department of Buildings and General Services previously operated a heat plant that utilized clean wood chips and No. 6 fuel oil to generate steam for heating buildings in the State Capital Complex. Originally, the plant was designed to burn coal. On this project, the two original boilers were replaced with two biomass boilers, with a newer backup oil boiler kept as a standby unit using No. 2 fuel oil. The plant continues to supply steam to the State Capital Complex, but now additionally provides hot water thermal energy to the City of Montpelier for heating nearby facilities. A total of 411,000 square feet of space in downtown Montpelier are heated through District Heat Montpelier, and there is additional capacity available for future expansion. Customers on district heat pay a base rate for connection to the system, plus an energy rate of $8.82 per million BTUs, based on how much heat customers actually use for their buildings.