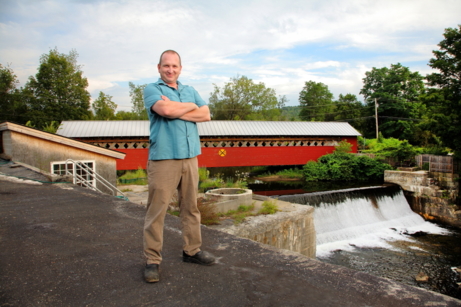 Bill Scully didn’t plan on being a hydropower developer. He has a restaurant background. One December day, he was driving home and listening to a National Public Radio talk about climate change and rising energy costs. He had an epiphany. There were five dams in his backyard, why wasn’t he driving an electric car fueled by local renewable energy?

Hydropower has not seen the same level of interest in Vermont as solar and wind. There are roughly 1200 aging dams in the state and Scully says a few hundred are likely good sites for hydro. However - the Vermont Tissue Dam (another of Scully’s projects) was only the second to receive a license in Vermont in 35 years. Renewing or licensing dams is a complicated process involving state and federal agencies, local planning commissions, town government and others. When asked about the regulatory process Scully remarked that it was slow but that it was meant to be slow because it is accessing the rivers that are important natural resources held in public trust. As such, Scully believes any decisions should be made thoughtfully. The goal is to help ensure the protection of water quality, fish habitat and a healthy flow of the river.

Rebuilt in the 1950s, the Pownal dam powered the Pownal Tannery (although various structures have been there since the original mill in the 1880s). The Pownal Tannery went bankrupt in 1988 and the town reluctantly took control of the hydro facility. Many developers have looked at developing the site but environmental contamination in the form of polychlorinated biphenyls or PCBs in the sediment behind the dam made the project unfeasible even with Environmental Protection Agency brownfield grants.

The Pownal project is the second dam renovation Scully has undertaken. The first was the Vermont Tissue Dam in North Bennington. That dam went online in 2015 and has a capacity of 360kW. Redeveloping the Tissue Dam required the removal of PCBs, dioxin and lead in the sediment that had accumulated behind the dam as well as a new license. Scully credits that more complicated experience as important to helping him renovate the Pownal Dam which also required the, removal of PCBs and an amended exemption from licensing.

Licenses for hydropower facilities come from the Federal Energy Regulatory Committee (FERC) and they typically last for 30-50 years. Hydropower is a long-term investment, the sites produce large amounts of power but they require lots of infrastructure. Scully says he will not start seeing positive cash flow for at least 20 years, but he is okay with that. He didn’t get into this to make money, he wanted to take action against climate change.

While hydropower may take a lot of money and infrastructure at the start, it has the benefit of constantly producing energy (unlike intermittent solar and wind). This type of renewable “baseload power” is an important resource in the transition to more intermittent renewable resources like wind and solar. Scully praised solar power for lowering the peak load demands, but said the value in hydro is the large amounts of power it can produce.

Due to concerns with fish passage and water quality, some environmental organizations and river stewards have been pushing to remove Vermont’s old dams. Scully is very supportive of those efforts but says climate change isn’t good for the rivers either. He remarked that the Vermont Tissue Dam actually improved water quality by installing a fish passage and removing toxic materials.

Work on Pownal hydro project could begin this summer