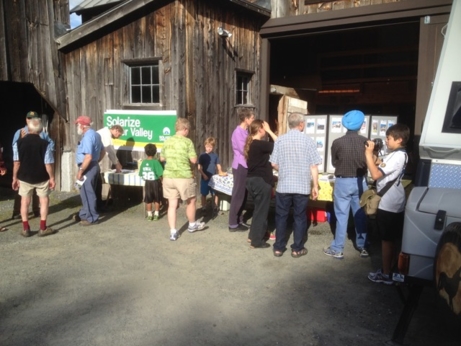 In 2014 the Thetford Energy Committee (TEC) partnered with our neighboring town Strafford’s energy committee to promote residential on-site solar through a Solarize program organized by Vital Communities. Through this initiative, the towns nearly tripled the number of on-site residential solar installations in our towns in 5 months, with more than 250 kW of solar panels installed for 46 households (32 from Thetford). The program also had the ripple effect of helping to spur another 10 families to install 39 kW of solar panels outside of, but concurrent with, the Solarize program. Several factors combined to make this a hugely successful project.

The Solarize process included sending out Request for Proposals (RFP) to a number of solar installers who had expressed interest in providing services to participating towns. With Vital Communities’ help, the energy committees reviewed the proposals, selected candidates to interview, and chose a solar installer for our town. The energy committees in both towns are respected, and having us wade through proposals, interview finalists, and choose a provider gave assurance, comfort, and ease to participating homeowners.

In their proposals, the solar installers vying to provide services to our town offered tiered discounts on the costs of systems as the total kilowatt capacity from all the ordered systems increased – so the more folks who ended up participating, the greater the discounts. Throughout the Solarize campaign, progress toward the largest discounted tier was promoted and many folks who chose to participate listed these discounts as a major factor in encouraging them to go solar.

This discounted program offer was good for a limited time only, and the deadline for participating was clearly advertised at all events. Knowing they had a deadline by which to make the decision was critical to many who ended up participating, as evidenced by the 46% of folks who decided to move forward with their projects in the final month of Solarize.

Vital Communities made this project easy to implement by providing participating towns with a prepared Request for Proposals, interview questions and selection criteria, publicity templates, and a general framework and handholding throughout the program. While Vital Communities is no longer providing individual assistance to towns wanting to participate in a Solarize campaign, they have developed a free toolkit that any energy committee can use to replicate this effort, available at vitalcommunities.org/energy/solarizetoolkit/.

More information about the Solarize Upper Valley campaign run by Vital Communities is available at vitalcommunities.org/energy/solarize/