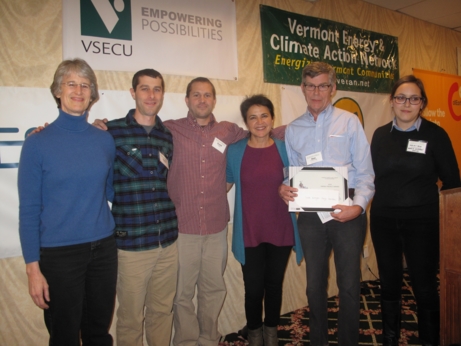 By Fall 2016, all parties celebrated the issuance of a certificate of public good for a 2.2 Mw solar array. Construction began in the late Spring of 2017. The array will be on a closed and capped landfill that has been unused for the past 25 years. It turns an otherwise undevelopable location into a productive solar site. Even when landfills are closed they often present too many risks to develop into other uses. The “cap” of soil over the landfill cannot be breached so large concrete blocks will anchor the panels.

The project was not financially feasible until 2014 when the Vermont Legislature passed Act 99 which expanded the allowable size of net metering on landfills to 5 Mw, thereby helping to bring otherwise unfinanceable projects like this into the realm of the possible. The South Burlington landfill project could then capitalize on the benefits of economies of scale from larger projects, take advantage of attractive net metering incentives and utilize an otherwise unusable location to help bring down the cost of electricity for South Burlington’s municipality and schools, while increasing the share of renewable energy in the community’s energy use.

The array covers eight acres and is well-sited close to industrial uses such as the wastewater treatment plant and the airport. Landfills are also a preferred site under Act 174 (Energy Planning), which encourages renewable energy generation on already disturbed sites. The project represents a likely savings of $5 million over the 25-year life of the project for the city and the school district due to the favorable – and predictable - price the city will pay for the solar power. It will also generate thousands of dollars in new property taxes. All of this is done without any taxpayer investment due to the innovative public/private partnership.

The power is being purchased via a Power Purchase Agreement with Altus Power America, Inc. which is based in Connecticut and will finance the project. As a private entity, they can take advantage of the 30% tax credit of the project, and pass on those benefits in lower electricity prices to South Burlington and its schools. Encore Renewable Energy planned the project, tackling issues of siting, design, permitting, capital and more. Encore specializes in municipal scale projects on underused land such as landfills and brownfields.

The South Burlington Energy Committee learned a lot through this project and have consolidated their thoughts into a helpful guide: Implementing Solar for Your Town or School District. This project is an excellent example of what can happen with thoughtful planning and persistence.

How a PPA Works to Save Municipalities $$ on Electricity