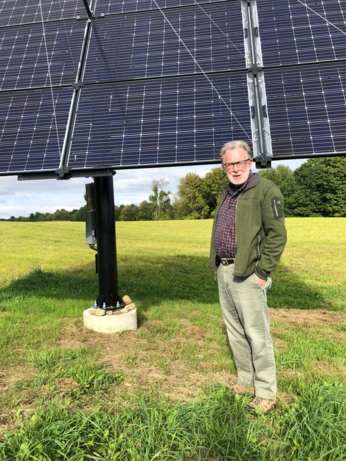 Early this month at the VECAN conference hosted in Fairlee, VT, Jock Gill presented alongside Green Mountain Power on Strategic Electrification. The presenters offered a beneficial contrast in perspective through the utility’s point of view and also from an actively energy efficient residential aspect.
Jock was elected chairman of the Peacham Energy Committee this past summer for a 2-year term. His actions at home surely do not contradict his work towards creating a more electrified community; at his house alone, he owns an electric vehicle with a level two charger powered by two Tesla batteries provided by Green Mountain Power, a PV which generates the energy for his house, car, and the grid, a hybrid hot water heater, a nest thermostat, and a wood pellet stove. Yet, his personal success in creating efficient electricity has not stopped at home. Jock has applied his first-hand experience with energy efficiency to his work for the Peacham Energy Committee. Since Green Mountain Power services half of the town, it’s essential that an energy plan is made on the same page as the utility.
While Jock spoke heavily on the exponential expansion of electric vehicles, he placed more importance on the collaboration of all electrical components. The Tesla batteries that charge his EV receive their power from the leftover electricity generated from the solar panel on his property. The PV resides in the barn where it’s “out of sight, out of mind, and out of the weather,” according to Jock. “It’s not directly connected to those things that solar power will power. I just have to use the excess solar that I generate to offset the amount of energy that I use for the car.” The EV has increased his kW usage by about 25%, but the total electrification of the house has prevented any negative implications. Jock wants to apply this synergetic relationship within households to a major Energy Plan throughout Peacham. There needs to be a shift towards total electrification and an increased number of charging stations, as well as strategic planning for additional solar.
The current amount of EVs in Vermont is 2,300, and the total current Vermont fleet of standard vehicles is 300,000, which leaves plenty of room for improvement. Since the Vermont Comprehensive Energy Plan calls for 10% renewable transportation by 2025, and we were only at about 5.5% as of 2015, there has to be a significant change and fast. The goal is to have 60,000 electric vehicles on the road by this time. While this goal may seem steep, Jock’s projections for EV growth deem it perfectly plausible due to the doubling period. This predicts that there will be twice as many EVs on the road next year and so on. This kind of exponential growth would lead Vermont to meeting the 2025 goal years prior.
In regard to the widespread growth of electric vehicles and what needs to be done in order for that to happen, Jock stated “most people are compelled by benefits rather than features.” Of course, there are some fundamental improvements that need to be made in order to spur this rapid growth. Electric vehicles take hours to charge and they only have a range of about 100 miles per charge. While this isn’t a problem for those driving within close ranges, they’re not exactly fit for long distances just yet; although, plans involving rapid charging times and additional charging station infrastructure are in the works. There has been a lack of promotion from car dealers to initiate more people to purchase EVs, as well as a lack of policy to make them more accessible to Vermonters of all economic statuses. However, with more consumer education, residents can learn about the money they would be saving on gas and oil changes, the locations of charging stations, and the convenience of charging your car at home.
“The electric car is great. Solar power is great. The combination of the two is really much greater than either one alone” says Jock. The interactions between individual assets produce a result much greater than its parts. Jock has demonstrated the beneficial outcomes on his own property and hopes to apply this type of collaboration to Peacham as they embark on their own energy transition.