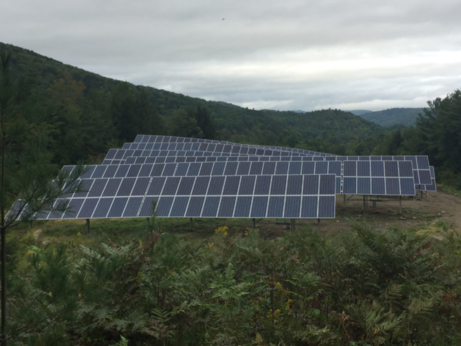 The Thetford Strafford Community Solar (TSCS) farm, in Thetford, Vermont, is now operational. Unlike the state’s earlier community solar installations, the TSCS farm has a mix of types of members. It was formed as a partnership of residents of Thetford, Strafford, and Norwich, a commercial farm, and the town of Thetford itself. Its mixed membership make it a mixed-use community solar farm, the first of its kind in the state.

The solar array has 185 kilowatts of photovoltaic panels. Together, they should produce about 230,000 kilowatt-hours of electricity each year. The electricity is to be sold to Green Mountain Power (GMP) under a net-metering contract. GMP gets the renewable energy credits associated with the energy and retires them.

Net-metering also benefits the owners of the system’s 187 shares, who invested $2,782 for each share, by reducing their electric bills. About 85% of the electricity their shares generate is credited to their GMP meter under net-metering to GMP. The remaining 15% of the electricity from the solar farm is credited to the Town of Thetford’s meters under a 25-year credit purchase agreement the town has entered into with TSCS, allowing the town to buy power at a discounted utility rate and providing a slight downward pressure on the tax burden to benefit all residents.

While most, or possibly all, of the owners bought shares in TSCS to help reduce the world’s carbon emissions, most may also have invested to save money. At least one customer bought two shares specifically to be able to cover the increased power consumption of new heat pumps. Dori Wolfe’s company, Wolfe Energy, already renewably powered, will be heated by getting electricity from its two shares.

Building the TSCS system engaged a number of subcontractors in Vermont and New Hampshire. Foremost among them was Norwich Technologies, which built the TSCS array. There will also always be some maintenance to keep the array in top working order, plus the cost of insurance and taxes are the reasons why 15% of the power produced is sold to the Town of Thetford.

The organization is not the only thing novel about the installation. It does not have a fence to keep animals out. This is because the land is home to deer migration. There is technology making the fences unnecessary; one way to do this is to put a fabric coating on wires that makes the array code-compliant in lieu of a fence. The absence of fences means that wildlife living patterns are not disrupted.

The TSCS array was put up during a somewhat slow time for solar construction in Vermont. In-state production of renewable electricity has increased from 12% in 2010 to 20% today. That might sound like progress, but it is nowhere near as fast as what we need to get 90% of our energy from renewable sources by 2050. To do that, we will have to replace nearly all of the fossil fuels we use to power our vehicles, heat our homes, and provide for the needs of industry, and they will have to be replaced by electric power. We have two choices for where the increased power for that comes from: local renewable sources and out-of-state renewable sources. Out-of-state sources imply a flow of money out of Vermont, and they also imply increases in the state’s transmission lines.

The TSCS array provides an example of how a renewable energy system can benefit all of the people of a community. Because it is easily replicable, it may provide some guidance to the benefit of all people everywhere, as we deal with climate change.