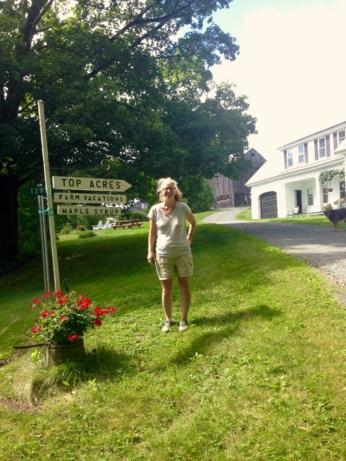 Mary McCuaig stands at the entry to the farm
Photo credit: Jenevra Wetmore

Mary and Carl McCuaig’s farm sits on 30 acres of rolling South Woodstock hills, where they grow hay and make maple syrup. The historic farm has been in Mary’s family since 1901, but Mary and Carl recently decided to give their farm a modern addition. In May of 2015, Top Acres Farm went solar.

The McCuaigs were not expecting to install solar at their farmstead. As Mary said, “we were always interested in solar but we didn’t think it was anything that we could do financially.” Sustainable Woodstock’s Solarize campaign, which encourages people in the Woodstock area to switch to solar, changed their minds. They learned that they could pay off their panels in eight to ten years, after which they would actually be saving money with free electricity.

The McCuaigs installed 33 panels on the south-facing roof of one of their barns, which dates back to the 1830’s. The panels were installed by Integrity Energy and are rated to produce 8415 watts of electricity. Integrity Energy estimated that the panels would cover 80% of the farm’s electricity, but the couple has found that they cover closer to 90% of their total yearly electricity use– they only had to spend $140 on electricity for the farm and house all of last year!

The panels cost $31,135, but the couple was eligible for two incentive programs that helped reduce this initial investment.  Vermont’s small-scale renewable energy incentive program (funded through the Clean Energy Development Fund at the VT Public Service Department) allowed them to subtract  $2,104 . This statewide program ended in 2015. They paid the remaining cost– $29,031– to Integrity Energy.  However, the couple was also eligible for a 30% federal tax credit on the cost of installation, so in the end they only paid $20,322. During the summer months they produce more electricity than they use. Green Mountain Power, their electrical utility, gives them a credit for this excess power that they can then use in the winter when they’re not generating as much electricity. This July they banked $128.14 of solar credit, and Mary loves the money the solar panels are saving her. As she said, “They’re just paying you back every day!”

Solar panels power the McCuaig’s large 1840’s home, which includes Mary and Carl, Mary’s father, and various short-term renters in a couple of extra rooms. They use wood for most of their heating and propane for hot water, so the solar powers all lights, air conditioners, and a few electric space heaters. Electricity also runs a large fan in their wood furnace. On the farm, solar runs their reverse osmosis machine used in the production of maple syrup, which is no small task– the McCuaigs make 2,000 gallons of syrup a year.

Mary calls the solar panels “a real joy,” and loves watching them, especially knowing that they are powering the farm and home. The panels save her farm money in the long run and together with the weatherization actions they have undertaken, make it far more energy efficient. She is also happy to continue her family farm’s legacy in a new way, by adding solar to what they are harvesting. Mary’s grandfather once ran the farm. Thinking of him and of the new addition, she said, “I really feel that my grandfather would be impressed. I like tradition, but I also like to be progressive and keep up with the times.”

Looking to the future, Mary could see adding even more solar onto one of the barns, or out in the fields. To keep up with her and her husband, visit https://www.woodstockvt.com/farms/companies/6657-top-acres-farm