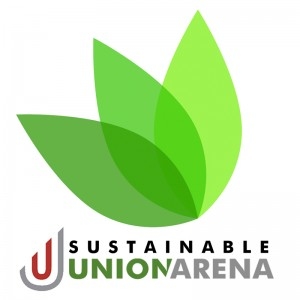 This week, I sat down to talk with Harold Mayhew, a local architect who owns Bear Mountain Design AC, LTD in Barnard and the president of the Union Arena Board of Directors. Harold and the Union Arena the board are part of a team of local community leaders helping turn Union Arena into the first net zero hockey rink in North America. He and his team recently received a $109,000 sustainability incentive from Efficiency Vermont and a sustainability award from Sustainable Woodstock.

How did the idea for a net zero hockey rink in Woodstock begin?

I’ve always been interested in energy efficiency. The idea for the rink first began about half dozen years ago after I designed the first LEED certified ice rink in North America for a college in Maine. After LEED I set my sights on the next step in rink sustainability.

When we originally built Union Arena, it was one of most efficient year-round rinks in the state. But as time passed, the facility aged and equipment wasn’t functioning the way it once had. After completing the LEED rink in Maine, I had a vision of building a rink that had no net annual cost for electricity or fuel. I wanted to figure out a way to make the rink function without having annual bills for fuel and electricity, as these costs amount for a third of annual operations budget for the rink.

About five years ago, I spoke to a group of local rink supporters about creating a rink that was essentially self-sustaining. Union Arena had never taken any tax revenue or asked for any taxes to be put toward its maintenance. We didn’t want to be a tax burden in the community. The same goes for constructing a net zero facility. We want to be able to build this without asking for tax revenue.

I worked with the Union Arena Board of Directors to draft the initial idea to create a net zero rink. I volunteered to be the architect and donate all my time toward the design and construction of the rink, using what I learned over the years building rinks for increased energy efficiency.

Can you tell me a little more about the project timeline going forward?

Construction of the rink is split it into four phases. The reason for this is that it is be easier to break it into smaller chunks of work and fundraise for each phase. We completed the first phase and are already saving 30% on our electricity use. We’ll cut electricity use a lot more in the next three phases. We received funding from Efficiency Vermont and many donations from community members. We’ll be putting these funds toward the next phase of construction scheduled to start in 2018. This phase will be critical because it will focus on the fossil fuel side of the equation, reducing our fossil fuel consumption by well over 50%.

The final phases will include systems integration and renewable energy sources. Through the use of newly available computerized digital controls to comprehensively monitor the fuel systems and electrical refrigeration systems to optimize these systems creating greater efficiency.

The renewable energy source will most likely be solar PV. This installation would offset about a third of our electrical consumption, which is about equal to the amount already achieved in phase one. We wanted to target reductions in consumption prior to installing solar because it is important to reduce overall energy consumption and the carbon footprint.

How has the community been involved so far?

There has been tremendous support. Dozens and dozens of community members have donated to the project. The Union Arena board and staff are working to realize this dream of a net zero facility. The project is far bigger than just me. It absolutely could not have happened without such an incredible team and community committed to seeing this through.

How can people donate to this work?

The overall target for the next phase of work is $600,000. We have already raised approximately $400,000 and have another $200,000 to raise before the end of the year. The great thing about this project is that it has support from a wide swath of the community. We’ve received small and large donations from $10 to over $100,000. All are welcome and helpful. Everything counts and every little penny helps us get closer to realizing our goal. If someone would like to donate, all they need to do is send a check to Union Arena made out to the Union Arena Sustainability Campaign.

I would like to thank all those who have already donated and thank the great team working on this project together.