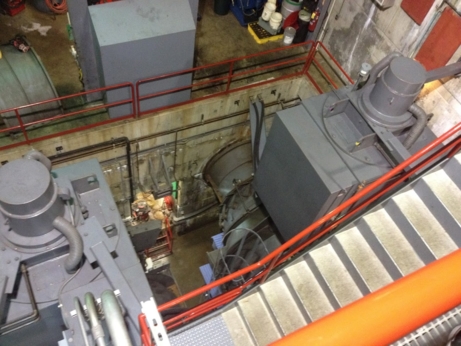 Inside the control room of Winooski One Hydro.
Photo credit: Ben Howe

Sitting 35 feet below a 5.7 acre reservoir in downtown Winooski are three massive German manufactured Sulzer Escher Wyss 3-bevel gear full Kaplan Bulb turbines cranking out up to 7.4  megawatts of electricity and pumping it into Burlington’s electrical grid day in and day out.

Standing next to the unassuming cement structure, chief operations manager Jon Clark points over the edge of the railing to indicate a sheet of metal grates descending into the foamy water which are designed to prevent debris from entering the intake chute and damaging the precisely machined turbines spinning furiously below us. Jon draws our attention upward to the two slightly bizarre looking inflatable Bridgestone brand rubber bumpers stretching across the top of the 200 foot long spillway, explaining that he can deflate them with just a five horsepower motor to release tree snags, manage flood overflow, or oxygenate the water if the EPA or the Department of Wildlife and Fisheries deems it necessary.

Resting his arm against the railing, Jon describes how three hydraulic sluice gates housed in the dam’s superstructure can be lowered to adjust water flow to the turbines and thus control overall reservoir depth. When asked why the turbines don’t always just operate at full capacity Jon shrugs, “Well if we wanted we could run this at full volume all day long but it’d empty out the reservoir before the end of the day. And we’re more responsible than that.”

Leading us over to the facility’s only entrance and entering a combination code into the keypad next to the galvanized metal door he remarks, “This whole thing, I can run it from my phone.” Pausing in the doorway, “I don’t know how long that’s going to last” he adds, “they say it’s a security issue.”

Built in 1993 for $16 million dollars (nearly $28 million when adjusted for inflation) Winooski One was purchased by Burlington Electric in 2014 as the municipality owned utility sought to increase its renewable energy portfolio. Since then, the facility has proven to be a reliable source of clean energy for the city.

The door swings shut behind us and we’re immediately enveloped by a deep humming and the slightly funky smell of oil and damp concrete. The hallway is narrow with a slanted floor that Jon explains is designed to direct water away from the main turbine room in the event of extreme flooding. Stepping down a flight of stairs, we pop out into the main turbine room and it’s so large that I’m a little taken aback. It reminds me of a huge underground cavern that spelunkers might stumble across miles underground.

One of the enormous turbines is partially disassembled. We walk along the suspended metal walkway to get a better look. Jon is saying something but I can’t hear him over the noise of the turbine. He waves us back and we follow him into the control room. It’s incredibly quiet by comparison. A mustached man in a blue jumpsuit sits by a drafting table covered in detailed mechanical drawings and a huge bag of trail mix. He nods as we walk by. We look at the many cryptic displays that monitor the generators’ output while Jon pulls up screens on the large computer monitors at his desk. As we’re leaving the control room the man in the blue jumpsuit wishes Jon a good night and I’m surprised to hear that he has a thick German accent. Jon explains that he’s been flown in from Germany to help with the turbine repair.

. Back at the main entrance, Jon holds the door open for us and remarks, “You know, it’s a pretty good way to make energy when you think about it,” a little bit of pride enters his voice, “you look at the McNeil plant— it’s as big as a city block. It uses something, like, nine hundred trees a day to make it run. This dam, all it does is just sit here. It doesn’t take much” And with that, the tour is over.